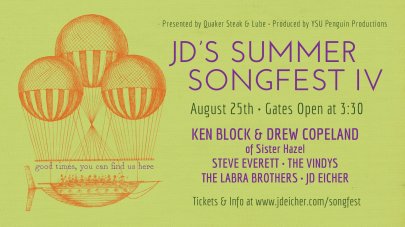 It’s Saturday, and there’s some cool stuff going on today … here’s a quick Top Four … JD’s Summer Songfest IV at The Soap Gallery in Youngstown on East Champion Street starting at 3:30 p.m.; over in Austintown  Paladin Brewing‘s 3rd Anniversary Celebration that is featuring their great beers and Penguin City Beer starting at 2 p.m. and Numbers Brewing Company 3rd Annual Block Party down in Lisbon that started at Noon  and finally, if you’re at any of our great Lake Milton area wineries, Lite the Nite Fireworks is putting on a huge fireworks show tonight … but if those aren’t your thing … here’s what else is happening. Cheers!

The Best in Live Music for Saturday